Housing First is a Failure

Early in the 2000s, both political parties, and the homeless advocacy community, came to a new consensus. They argued that the problem of homelessness was solvable, and that they knew the solution: “Housing First.” Originally created by New York social worker Sam Tsembris in 1992, the premise of Housing First was so simple as to be startling.[1] If homelessness was caused by lack of a housing, we should simply give homeless people a house. Soon many private and public figures announced that they could provide every chronically homeless person with a “Permanent Supportive Housing” unit or PSH, as they’re known, and thus help end homelessness within a decade.[2]

The problem is that now, 20 years on, we’ve run the Housing First experiment, and it didn’t work. We’ve built over 200,000 new PSH units for the homeless, as they’re known, and, since 2013, the federal government has mandated the Housing First strategy nationwide. Yet since that nationwide mandate has gone into effect, we’ve seen street homelessness increase by almost a fourth. While some advocates cite the overall decline in homelessness since the early 2000s, they ignore that the entire decline was the result of moving people from “transitional” government housing, which was counted as homeless, to “permanent” government housing, which was counted as not homeless. In effect, if one ignores this statistical smoke show, homelessness has gone up almost one-to-one with the increase in permanent housing. [3]

Why doesn’t permanent housing help people exit from homelessness? A simple reason is that it appears to attract more people from outside the homeless system, or keeps them in the homelessness system, because they are drawn to the promise of a permanent and usually rent-free room. A recent economic analysis shows that cities have to build 10 PSH beds to remove a single homeless person from the street, since the vast majority of such units go to people who would not have been permanently homeless. Even the removal of that sole homeless individual from the streets seem to fade over time as more people enter the homelessness system.[4]

Several cities and states show the failure of the Housing First approach. San Francisco has built enough permanent housing to house every single chronically homeless individual in the city back in 2011. Yet instead of “ending homelessness,” as then Mayor Gavin Newsom had promised, homelessness increased substantially until the city became an international byword for the homelessness crisis.[5] The state of Arizona has built over 7,000 permanent homes for the homeless since 2010, enough to house every unsheltered person when they began, but the number of Arizonians living on the streets has increased by 50% in recent years.[6]

The emphasis on Housing First has caused many places to de-emphasize short-term shelter as well. San Francisco’s focus on permanent homes explains why the number of shelter beds in the city dropped by a third in the decade after 2004.[7] Arizona had over 2,500 more short-term and shelter beds about a decade ago, before cities began emphasizing a Housing First model. Meanwhile, the number of unsheltered in Phoenix have more than doubled just in the last five years.[8]

Another reason Housing First doesn’t work is that it ignores that the major problems for the chronically homeless aren’t just lack of a home. A recent UCLA study found that more than 75% of this population have a serious mental illness, and 75% have a substance abuse problem, and the majority have both. These individuals are reluctant to accept assistance without mandates and requirements, and a house without such mandates will not encourage use of these services.[9]

There was once some hope that housing alone could help reduce drug use and mental health problems. Yet studies have now shown that simply providing people subsidized housing does not reduce drug use, and often encourages it, which makes sense because there is no mandated treatment in PSH and the free unit provides people with more money to pursue their habits.[10] In one randomized-control trial in Ottawa, the homeless put in PSH had higher rates of substance use, mental illness, and death than people simply left on the streets.[11] We’ve seen similar results for mental illness. A chilling documentary on PBS showed that for many people with mental illnesses a permanent apartment increased social isolation.[12] More concerning, a survey of all PSH studies from the National Academies of Science found “that there is no substantial published evidence as yet to demonstrate that PSH improves health outcomes.”[13] Thus, PSH, on its own, is not an effective or cost-efficient tactic for improving the lives of the chronically homeless.[14]

The costs of this ever-growing increase in homeless housing are staggering and have led to predictable corruption and large profits for many so-called non-profit developers. In San Francisco, each PSH unit can cost up to $750,000. In Los Angeles, when voters passed a bond issue for more PSH, the city said they would cost $140,000 each. Instead, they cost triple that, and some cost over $700,000.[15] In many cities, landlords receive massive rents or use third-party for-profit maintenance companies to earn millions on properties for the homeless.[16]

Despite some early hopes, the results are in, and we now know that Housing First has failed. It is expensive, ineffective, and, often, counterproductive. While some individuals may benefit from PSH, as a sole strategy for “ending homelessness,” it has and will continue to frustrate the cities that pursue it. Luckily, on the federal level, a bill introduced by Representative Andy Barr of Kentucky, and co-sponsored by Congressmen Chip Roy and Roger Williams, among others, aims to end the federal government’s sole focus on Housing First, and redirect funding towards more fruitful paths.[17] All levels of government should refocus their homelessness strategies on short-term shelter, moving people off the streets, and more mental health and substance-use treatment. While we can’t hope to end homelessness, we can hope to ameliorate it.

[3] US Interagency Council on Homelessness, “Expanding the Toolbox: The Whole-of-Government Response to Homelessness,” October 2020,  https://www.foundationhomeless.org/expanding-the-toolbox; https://media4.manhattan-institute.org/sites/default/files/housing-first-and-homelessness-SE.pdf

[5] https://www.sfchronicle.com/archive/item/A-decade-of-homelessness-Thousands-in-S-F-30431.php, https://www.hudexchange.info/programs/coc/coc-housing-inventory-count-reports/?filter_Year=&filter_Scope=CoC&filter_State=CA&filter_CoC=CA-501&program=CoC&group=HIC, https://www.hudexchange.info/programs/coc/coc-housing-inventory-count-reports/?filter_Year=&filter_Scope=CoC&filter_State=CA&filter_CoC=CA-501&program=CoC&group=HIC Although we don’t know the breakdown for most cities and states referred to in this article, some of these permanent housing units were built, some were purchased, and some were leased. 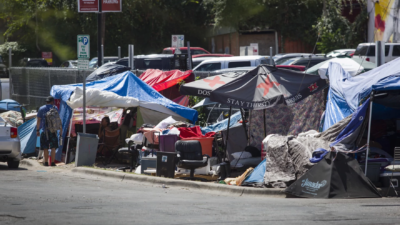